When Employees Steal, The SEC May Punish The Company And The CEO

In this week's issue of Compliance Week, Tammy Whitehouse writes about the SEC's recent enforcement action against Koss Corporation and Michael J. Koss, its Chief Executive Officer and former Chief Financial Officer.  According to the SEC's complaint, Koss Corporation’s former Principal Accounting Officer and its former Senior Accountant, engaged in a wide-ranging accounting fraud to cover up the PAO's embezzlement of over $30 million from the company.  No one should be surprised to learn that the PAO has already pleaded guilty to six counts of wire fraud.  The court ordered her to pay $34 million in restitution and sentenced her to 11 years in prison.  The SEC also filed this complaint against the two employees.

After discovering the embezzlement, Koss Corporation reported the occurrence to its shareholders and enforcement authorities.  The company also amended and restated its financial statements for fiscal years 2008 and 2009 and the first three quarters of fiscal year 2010.  The company is clearly the victim of a crime.  It reported the crime and corrected its financial statements.  According to the SEC, they also cooperated. Yet, the SEC filed a lawsuit against the company and its CEO.  So why did the SEC feel compelled to punish the victims?

The SEC charged Koss Corporation with filing materially false financial statements and failure to keep proper books and records.  Mr. Koss was charged with aiding and abetting Koss Corporation (not the embezzlers).  While apparently no one disputes that the books and records were wrong, the fault ultimately was with the two employees.  For confirmation of this fact, one need look no farther than the SEC's complaint which states: "The inaccurate financial statements, in turn, were based on inaccurate accounting records prepared by Sachdeva [the PAO] and Mulvaney [the Senior Accountant]."

At its heart, the SEC is punishing Koss Corporation for not adequately maintaining internal controls to reasonably assure the accuracy and reliability of financial reporting.   While the complaint details many deficiencies, it also makes it clear that the embezzlement required the involvement of two people and multiple methods to escape detection.  Moreover, what is required is reasonable, not absolute, assurance.  After a crash has occurred, one can almost always opine with confidence that more could have been done to prevent it.  The cost-benefit calculus is decidedly more difficult before a crash when you don't even know whether there will be a crash.

The SEC also charged Mr. Koss with a violation of Rule 13a-14 for certifying the company's Form 10-K and 10-Qs.  The SEC alleged that Mr. Koss received certifications from the PAO but "did not conduct an adequate review of Koss's accounting in connection with these certifications".  CEOs and CFOs should take note.

This enforcement action is also noteworthy because the SEC forced Mr. Koss to reimburse Koss $242,419 in cash and 160,000 of options pursuant to Section 304 of the Sarbanes-Oxley Act.  This bonus reimbursement, together with his previous voluntary reimbursement of $208,895 in bonuses to Koss Corporation represents his entire fiscal year 2008, 2009 and 2010 incentive bonuses.

The SEC's decision to prosecute this case is troubling.  Surely, neither Koss Corporation nor Mr. Koss intended or wanted to be the victim of a criminal embezzlement.  It is also hard to see how the shareholders' benefited from the company incurring the legal costs associated with defending and settling the SEC investigation.  While the SEC did force the return of bonus compensation, the injunctive relief ordering the company and Mr. Koss not to do this again strikes me as silly.  Does it really make sense for the court to order a company not to be the victim of a theft?

Not surprisingly, the company has disclosed in its annual report on Form 10-K that both a class action and derivative suits were filed against it.  Koss Corporation has also sued its auditor and its bank.

If you would like to own a piece of the PAO's fraud, the U.S. Marshals Service has announced an on-line auction of the designer shoes, purses, and clothing that she purchased, including this Judith Leiber clutch handbag: 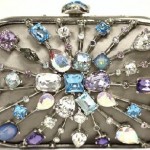