Since 2008, a total of 38 banks have failed in California (See this list of failed banks).  When this happens, the Federal Deposit Insurance Corporation acts as receiver for the bank.  Since the FDIC is also an insurer of the failed bank's deposits, it has an interest in pursuing directors, officers and professionals who were involved in the failure.  As of June 12, 2012, the FDIC has authorized suits in connection with 65 failed institutions against 562 individuals for director and officer liability.  In 1992, the FDIC issued this policy regarding suits against directors and officers.

In FDIC v. Hawker, 2012 U.S. Dist. LEXIS 79320 (E.D. Cal. June 7, 2012), the FDIC brought suit for $42 million against the former officers of County Bank, a state chartered bank.  The defendants moved to dismiss pursuant to Rule 12(b)(6) of the Federal Rules of Civil Procedure on the basis that the business judgment rule provided them with immunity from personal liability for acts of ordinary negligence under California law.   U.S. District Court Judge Lawrence J. O'Neill, however, denied the motion.

As an initial matter, Judge O'Neill found that the defendants as officers were not entitled to rely on Corporations Code Section 309:

Defendants seek to blend their conduct as directors with that of officers.  However, as noted by FDIC, the roles of officers and directors are distinct given officers' performance-based compensation and larger stake in a corporation compared with directors' limited com-pensation and corporate holdings. Defendants fail to substantiate their claim that "there is no basis under California law to conclude that the business judgment rule's protections for officers was repealed by implication upon the enactment of Section 309."

This case follows several recent rulings in the Central District of California concerning the application of the business judgment rule to officers.  Those rulings are discussed in Joseph, Banking Agencies Challenge California's Business Judgment Rule: Will This Expand Officer and Inside Director Liability? 1 Bus. L. News 9 (2012). 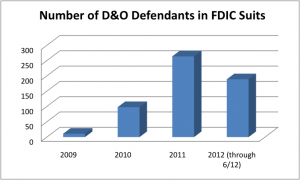