Something Appears To Be Awry With California's Insider Trading Statute

I trust that by now most quotidian readers of this blog should be familiar with Corporations Code Section 25402 which declares insider trading to be unlawful.  Although the statute has been on the books since the enactment of the Corporate Securities Law of 1968, it doesn't make a great deal of sense.  Here's the unabridged text of the statute:

It is unlawful for an issuer or any person who is an officer, director or controlling person of an issuer or any other person whose relationship to the issuer gives him access, directly or indirectly, to material information about the issuer not generally available to the public, to purchase or sell any security of the issuer in this state at a time when he knows material information about the issuer gained from such relationship which would significantly affect the market price of that security and which is not generally available to the public, and which he knows is not intended to be so available, unless he has reason to believe that the person selling to or buying from him is also in possession of the information.

My problem with the statute concerns the text highlighted in red.  The legislature makes the statute do double duty - making it unlawful for either an issuer or certain persons to engage in insider trading.  The language highlighted in red, however, appears to apply only to these other persons because it refers to information "gained from such relationship".  Note that the problem doesn't arise from the use of the personal pronoun "he" because Corporations Code Section 12 provides "The masculine gender includes the feminine and neuter".  The problem is with the phrase "gained from such relationship".   Unless one imagines the issuer having a relationship with itself, this portion of the statute wouldn't seem to apply to an issuer.  I think it must because there is no reason to believe that the legislature intended to declare unlawful an issuer's purchase or sale its securities in California, which would be the result of limiting the highlighted text to persons other than the issuer.

One of my hobbies is running on trails.  The other day, I happened upon this local resident enjoying the trailside straw: 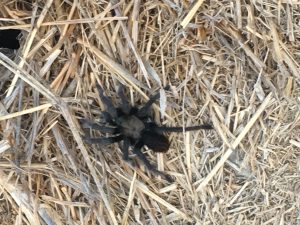 Coincidentally later that evening, I happened to be reading Chapter 21 of Samuel L. Clemens' Roughing It in which he describes the beast:

The surveyors brought back more tarantulas with them, and so we had quite a menagerie arranged along the shelves of the room.  Some of these spiders could straddle over a common saucer with their hairy, muscular legs, and when their feelings were hurt, or their dignity offended, they were the wickedest-looking desperadoes the animal world can furnish.  If their glass prison-houses were touched ever so lightly they were up and spoiling for a fight in a minute.  Starchy?--proud? Indeed, they would take up a straw and pick their teeth like a member of Congress.

Scienter In The News Again
Professor Robert J. Jackson Jr. Nominated To Become A Member Of The Securities And Exchange Commission

Court Of Chancery Rules Delaware Choice Of Law Does Not Defeat California Securities Law Claim
What Type Of Crime Is Securities Fraud In California?
Is The CSL (Over)Due For A Makeover?