A Town Without Written Leases And No Litigation

Recently, I visited Tonopah, Nevada, which is located about midway between Las Vegas and Reno.  According to legend, the town was founded after Jim Butler discovered a rich ledge of silver ore while chasing his wandering burros.  Historians can, and do, debate the accuracy of this tale, but the silver was indubitably real.  Reportedly, the Tonopah mining district ultimately produced precious metals valued at more than $1.2 billion in today's market.

Jim Butler, a lawyer also known by the sobriquet "Lazy Jim", had a problem, however.  As Samuel L. Clemens observed in Roughing It:

The Spanish proverb says it requires a gold mine to "run" a silver one, and it is true.  A beggar with a silver mine is a pitiable pauper indeed if he cannot sell.

In short, Jim Butler needed capital to develop his discovery and ship the ore to milled.  Although he found partners, they had no capital either.  As was common in those days, Butler sold leases to the ledge.  He sold these leases by the foot and eventually he had entered into over 100 leases.   Now, this is what I find beggars belief:

All leases were of a verbal nature, and it is quite remarkable that, although there was a great deal of wealth extracted, there was never any sort of litigation whatever, which shows the quality of men at that time in the camp.

Proceedings of the American Mining Congress (1908).  I don't know whether it was the quality of the men or the absence of lawyers that accounts for the want of litigation.

Unlike many Nevada mining towns, Tonopah was not completely abandoned after the mines played out.  Today, the town is home to the Tonopah Historic Mining Park, the Central Nevada Museum and the beautiful Mizpah Hotel.  The hotel opened in 1907 and was restored in 2011.  The hotel took its name from the nearby Mizpah mine which was located by Jim Butler's wife, Belle.  The Mizpah was the largest silver producer in the district.  See Genesis, 31:48 for the origin of "mizpah". 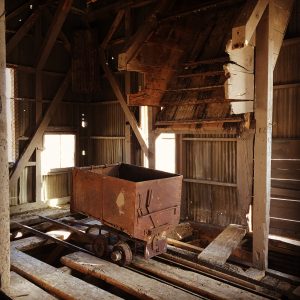 Inside the Silver Top Mine Grizzly

Section 25401 - Does No One Know Its History?
Standard Of Review Is Clear For Administrative Interpretations Of Statutes And Rules