Passengers flying to Las Vegas arrive at the McCarran International Airport.  Having spent my youth in Las Vegas, I have many memories of going to the airport to greet arriving family or to fly East for school.  Then, there was no passenger security screening and no jetway bridges to the planes.  Family members could say goodbye or welcome you at the gate.  You boarded the aircraft by walking out on to the tarmac and climbing the stairs to the aircraft.  Most of the airlines that serviced Las Vegas in those days (e.g., Bonanza, Hughes Airwest, Western Airlines, Aircal) no longer exist.

The airport was named for Senator Patrick A. McCarran and he, not the airport, is the true subject of this post.  Pat McCarran was the son of Irish immigrants to Nevada who, despite dropping out of college, eventually became a lawyer and then a United States Senator.  Senator McCarran's statue is one of Nevada's two statues in the National Statuary Hall Collection at the U.S. Capitol.  The Architect of the Capitol's description incorrectly credits Senator McCarran with having graduated from the University of Nevada.

Belieing his future success, young Pat McCarran's legal career began with a bizarre twist.  His first client was his father who had been indicted for removing telephone poles from his property and repurposing them as fence posts.  It seems that McCarran père had an aversion to the instrumentalities of Mr. Bell's invention.  At trial, McCarran jeune took the expected course of arguing vehemently that the authorities had indicted the wrong man.  McCarran jeune didn't stop there, however.  He went on to name the man who should be in the dock.  He had no doubts about that man's identity because it was none other than himself, a fact that he freely admitted to the court!  J. Boor, Logan: The Honorable Life and Scandalous Death of a Western Lawman, 99 (2014).

McCarran jeune went on to have a long, influential and controversial political career.  Earlier this year, State Senator Tick Segerblom introduced legislation to rename McCarran Airport for Senator Harry Reid.  The bill did not make it out of the Senate Government Affairs Committee. 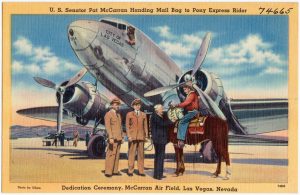 This postcard commemorates the dedication of McCarran Field

What Kind Of California Corporation Must Include A Salary Limitation In Its Articles Or Bylaws?
California And Virtual Annual Meetings