Home On The Grange

As a child, I was always puzzled when I saw a Grange Hall.  Was Grange a misspelling of "range"?  If not, what was a "grange"?  Only later did I learn that "grange" was derived from the Latin word, granum, meaning a seed.  The word forms part of the name of the National Grange of the Order of Patrons of Husbandry.  Organized in 1867, the Grange now describes itself as "a family, community organization with its roots in agriculture".  The Grange is organized hierarchically with community, county or district, state and national levels.

The California Grange argued that a head organization could obtain a subordinate corporation's assets only when two conditions were met:

The Court of Appeal disagreed, reasoning:

This is a bit confusing and corporate lawyers should note that the General Corporation Law also includes a statute (Section 204) that permits the articles of incorporation to include specified provisions that "shall not be effective unless expressly provided in the articles".  Both Section 7132 and 204 further provide that this does not "affect the enforceability, as between the parties thereto, of any lawful agreement not otherwise contrary to public policy". 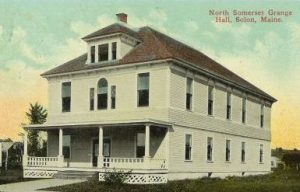 Is Someone Else's Purpose An Improper Purpose?
Of Touting, Tweets and Advertising