"You see, wire telegraph is a kind of a very, very long cat.
You pull his tail in New York and his head is meowing in Los Angeles."1

The word "telegraph" is a combination of two Greek words, τῆλε, meaning far off, and γράφειν, meaning to write.  The word "telegram" combines τῆλε with γραμμά, which refers to something that is written or drawn. 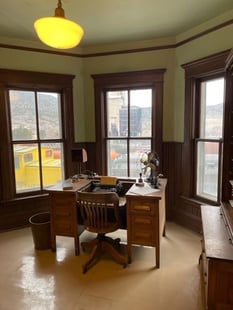 The telegraph office for the Northern Nevada Railroad in East Ely, Nevada (the telegraph is on the desk at the right)

Did The Ninth Circuit Find That Intent Matters In Determining Whether A Partnership Had Been Formed?
Knowledge Of Restrictions Dooms Stock Transfers
How A Corporation Can Become Religious Without Converting