California Bill Aims To End The Asymmetry Of Corporate Time

“It’s a mercy that time runs in one direction only, that we see the past but darkly and the future not at all.”1

For the last eight years, Delaware corporations have been been able to escape the "asymmetry of time" through either ratifying past corporate acts or obtaining validation from the Delaware Court of Chancery.  Del. Gen. Corp. Law §§ 204 & 205.  Similar procedures have been available to Nevada Corporations since 2015.  NRS § 78.0296.  Meanwhile, the California General Corporation Law currently provides no mechanism by which a corporation rectify a defective corporate act nunc pro tunc.

In 2021 Senator Brian Jones introduced SB 218 (Jones) to provide California corporations with implements of correction similar to those available to Delaware and Nevada corporations:

This bill would enact a method for California corporations to ratify or validate otherwise-lawful past corporate actions that are defective in some respect, and thereby correct the defects.  Crucially, any such ratification or validation would relate back to the date on which the original, defective action was taken.  That is, the corrections take effect retroactively; as a matter of law, it is as though the corporation had always taken the proper action.  Further, in the absence of fraud or a court order to the contrary, a ratification or validation under this measure is conclusive as to the correctness of the corporate action in question.  As a result, the corporate action can be safely relied on in the future.

1 Olivia Laing, To the River: A Journey Beneath the Surface. 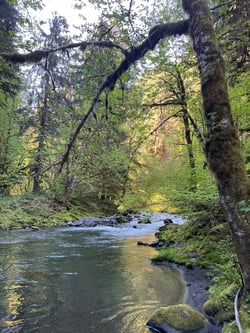 The Sol Duc (not Ouse) River

In This Case, Bylaws By Any Other Name Are Still Bylaws
Lawsuit Challenges DFPI's Threat To Enforce Fair Access To Credit Act