William Romanowski is a former NFL linebacker who later became the majority shareholder, director, and "public face" of Nutrition 53, Inc.  When the company's second largest shareholder was allegedly denied inspection of the corporate records, it sued the company and Mr. Romanowski for breach of fiduciary duty and violation of California's shareholder inspection statute - Corporations Code Section 1601.

Earlier this month, U.S. District Court Judge John A. Mendez dismissed both causes against Mr. Romanowski.  JAH Interests V, LLC v. Nutrition 53, Inc., 2021 U.S. Dist. LEXIS 87224.  With respect to Section 1601, Judge Mendez found that "the plain language of these provisions supports Romanowski's position because only the duties and obligations of corporate entities are expressly addressed in [Corporations Code] §§ 1601, 1602, 1604, 1605".   Section 1603(b) does require officers and agents of the corporation to produce documents "under penalty of punishment for contempt of court".   However, Judge Mendez found that that scenario arises when "there has been no superior court order to enforce Plaintiffs' inspection rights and thus those duties have not been triggered".   He further found that the plaintiffs had cited no authority for the court to find a cause of action against an individual officer or director.  Because Judge Mendez found any amendment would be futile, he dismissed this cause without leave to amend.

Today is Norway's Constitution Day, celebrating the signing of its constitution in 1814.  Gratulerer med dagen! 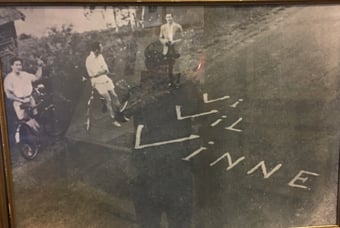 The above "We Will Win" photograph was taken in 1941 by Carl Dihle near Sundvollen, Norway.  The photograph became a famous resistance slogan and the Norwegian government in exile reproduced it on a postage stamp.