Did The Last Viking Sell Securities?

I have recently been reading Stephen R. Bown's book, The Last Viking: The Life of Roald Amundsen.  Readers may recall that it was the Norwegian Amundsen who famously beat the Englishman Robert Falcon Scott to the South Pole in what the press ex post facto reported as a race.  Tragically, Scott and four of his companions died on their own return from the Pole.

Amundsen went on to organize a number of expeditions involving the North Pole, including two unsuccessful attempts to fly to or over the Pole by airplane.  This was in the 1920s, so aviation was still very new.

As a private adventurer, Amundsen need to fund his expeditions.  One method was to pre-sell post cards with a specially designed stamp.  Amundsen took these cards as a special form of airmail.  Being a securities lawyer, I began to ponder whether these post cards might be construed as "securities" under the famous investment contract test enunciated by the Supreme Court in S.E.C. v. W.J. Howey Co., 328 U.S. 293 (1946):

"The test is whether the scheme involves an investment of money in a common enterprise with profits to come solely from the efforts of others. If that test be satisfied, it is immaterial whether the enterprise is speculative or non-speculative or whether there is a sale of property with or without intrinsic value."

In the case of Amundsen's post cards, the public was definitely investing money in a common enterprise.  The card purchasers' money, moreover, was pooled into a venture in which they all shared the risk of success or failure (whether Amundsen succeeded in carrying the mail).  One might debate whether there was an expectation of profits.  While some purchasers might simply have looked forward to the thrill of a unique method of delivery, it seems likely that the post cards would attain substantial value if Amundsen succeeded.

In any event, Amundsen needn't have worried about a call from the enforcement division of the Securities and Exchange Commission because it didn't then exist. 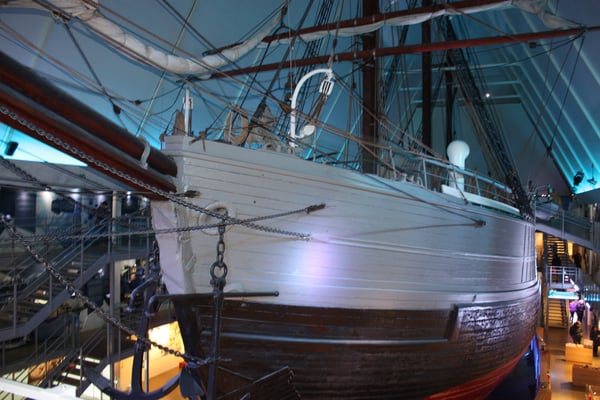 Above is a photograph of the Fram.  This stoutly constructed ship has both sales and an engine.  First used by the famed polar explorer Fridtjof Nansen,  Amundsen later sailed it to  Antarctica to launch his assault on the South Pole.  The ship is now on display in Bygdøy outside of Oslo, Norway.