How A Sack Of Flour Healed A Divided Electorate

In 1864, the voters of Austin, Nevada were almost evenly divided between supporters of the Union (Republicans) and advocates for an immediate peace treaty with the Confederacy (Copperheads).  Two eminent citizens bet on the outcome of the election.  Ruel C. Gridley, an ardent Copperhead, lost the bet and, as agreed, carried a 50 pound sack of flour from his store down the town's main street, marching to the tune of "Old John Brown".  At the end of the march, he auctioned off the sack with the proceeds going to the Sanitary Commission, a private agency for the support of sick and wounded Union soldiers.   Samuel Clemens, aka Mark Twain, gives an account of what happened next:

"Gridley mounted a dry-goods box and assumed the role of auctioneer. The bids went higher and higher, as the sympathies of the pioneers awoke and expanded, till at last the sack was knocked down to a mill man at two hundred and fifty dollars, and his check taken. He was asked where he would have the flour delivered, and he said:

Now the cheers went up royally, and the multitude were fairly in the spirit of the thing. So Gridley stood there and shouted and perspired till the sun went down; and when the crowd dispersed he had sold the sack to three hundred different people, and had taken in eight thousand dollars in gold. And still the flour sack was in his possession."

Roughing It, Chap. XLV.   The local newspaper, The Reese River Reveille, publicized the story and soon Gridley was traveling the West auctioning and re-auctioning his famous sack of flour.  Gridley eventually raised about $275,000 for the Sanitary Commission.

Gridley eventually moved to California where he died in 1870.  He was interred in an unmark grave in Stockton, but in 1887 on California Admission Day (Sept. 9)  an imposing monument was erected to mark his burial site.

Austin's mining boom did not last, but the town, unlike many other Nevada boomtowns, has lingered on.  Last month, I took this photo of Austin's Main Street where Gridley so long ago marched with his flour sack: 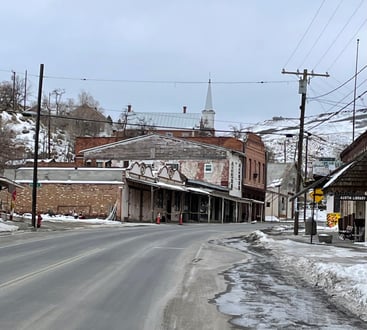 Gridley's store still stands in Austin, but apparently is no longer selling flour: 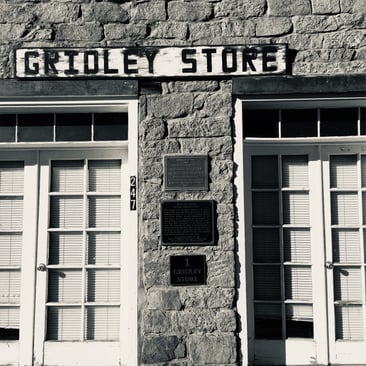 If You Are Looking To Be Taken Seriously, Write To The SEC And Be Prepared For A Wait
Is There A Fiduciary Duty To Consider Leaving California?

Court Of Appeal Admonishes Counsel With Coke
What Is Law? California Has Some Answers, But I Prefer Cicero's