Last month, Governor Newsom signed AB 1177, the California Public Banking Option Act.  The law's title is more impressive than accurate, for it does not actually create a public bank.  Rather, the law requires the Treasurer to convene a "Blue Ribbon Commission" that would contract to conduct a market analysis to determine if it is feasible to implement a “CalAccount Program".  The program would be required to offer "Californians access to a voluntary, zero-fee, zero-penalty, federally insured transaction account, known as a CalAccount".   Of course, there are no free lunches and that begins with the Commission itself.  The State Treasurer's Office estimated that it would cost $3 million to $4 million just to convene the Commission and contract for the market study.

Today marks the anniversary of the death of Charles Stewart Parnell in 1891.   Parnell was a member of the British Parliament from 1875 -1891.  Although born into the Anglo-Irish landowning class, Parnell became a popular advocate for Irish home rule.  Parnell's political "fall" occurred when his affair with a married woman, Katherine O'Shea, was publicized.   His funeral at Dublin's Glasnevin Cemetery was one of the largest ever held.  His death continues to be commemorated annually.   The event became known as "Ivy Day" in reference to the sprigs of ivy worn by Parnellites.

James Joyce made frequent references to Parnell in his writings, including a short story entitled "Ivy Day in the Committee Room" which appears in Dubliners.  In the story, one of the characters, Mr. Hynes, recites a paean to Parnell that begins:

"He is dead. Our Uncrowned King is dead.
O, Erin, mourn with grief and woe
For he lies dead whom the fell game of modern hypocrites laid low." 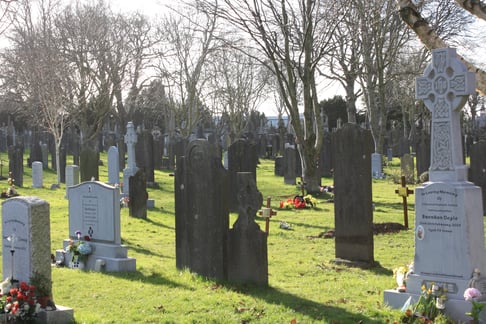