On This Date, Death Rode With The Posse To Fish Creek

Eureka, Nevada was once known as the "Pittsburgh of the West".  Today it describes itself as the "Friendliest Town on the Loneliest Road in America".   Eureka never had any steel mills, but it was often shrouded in smoke .  The smoke came not from burning coal but from charcoal.  The charcoal was burned in enormous quantities in the furnaces of the town's six smelters.

The raw material for the charcoal was supplied by the surrounding pinyon and juniper forests.  The cut wood was carefully burned in pits or large beehive shaped stone kilns. These pits and kilns were tended by immigrants from Northern Italy and the Italian speaking region of Switzerland.  The work was hard, dangerous and not particularly remunerative.  Eventually, these charcoal burners organized and tried to negotiate a higher price for their charcoal and more transparency with respect to drayage.  When the charcoal burners stopped shipments, the town faced a mortal threat to its energy supply and economic wellbeing.  Tragically, the tension boiled over on this date in 1879 when a sheriff's posse shot and killed five charcoal burners and wounded six others at nearby Fish Creek.

A grand jury investigation resulted in charges being dropped against both the striking burners and the sheriff's posse.  Nonetheless, the grand jury's report adopted a strong law and order stand:

In view of the occurrences connected with an incident upon what is commonly known as the Italian War, the Grand Jury regards this as a proper occasion for expressing their entire approval of the action of the Sheriff's posse in their determination to enforce the law at all hazards, and while the unfortunate result of this determination on the part of the said officers must be regretted by every good citizen; yet if such results are the consequence of demonstrating the power of the people, represented by their legal officers, to protect themselves in the free enjoyment and disposal of their property as to each seems best, then all acts on the part of the individuals, or organized body of men, which in any way contravene or interfere with the rights guaranteed by the law to each citizen, must be considered and regarded as acts to be resisted, even if death is the inevitable result.

Charcoal is no longer burned in Eureka and the air in this remote Nevada town is now pristine.  Although the Fish Creek massacre fails to earn a mention in many histories of the West, the Swiss and Italian charcoal burners are remembered  in Eureka.  Below is a photo of the monument at the Eureka gravesite of the five charcoal burners: 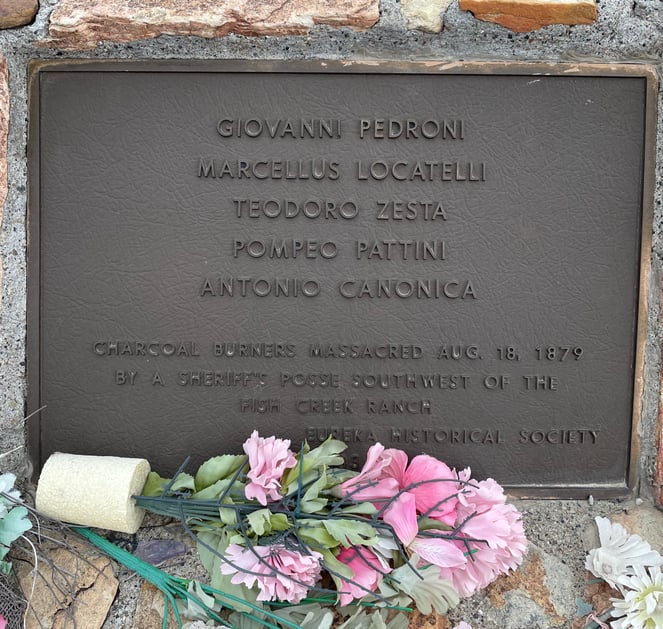 If You Filed This Notice Of Exemption With The DFPI, You Have Filed It In The Wrong Place
Court Of Appeal Agrees $280 Pizza Oven Is Not A "Thing Of Value"

A Cold Day In Caliente . . .
Who Qualifies As An Expert Witness?
Supreme Court's Decision In Famous Hale & Norcross Mining Case