Last week, I mentioned my recent visit to Pioche, Nevada.  Founded in the late 1800s, the town's early years were marked by an extraordinary level of violence.  Although unincorporated, the town remains the county seat of Lincoln County.  As the county seat, a courthouse was, of course, necessary.  In 1871, plans were underway to build a solid brick courthouse.  The construction costs were largely funded by the sale of $25,000 in bonds sold at discount for $20,000.  A year later, the courthouse was complete, but there were cost overruns, mismanagement, kick backs and other misfortunes.   The courthouse, which remains standing to this day, was condemned in 1937.   Four years later, the original indebtedness was paid off.  The taxpayers ended up paying almost $1 million for a condemned courthouse originally projected to cost $26,400.

The California legal community had a connection to the early Pioche in the form of Jesse S. "Judge" Pitzer.  Originally from Ohio, Judge Pitzer had been a justice in 1856 in California's 15th Judicial District.  He also served one of the shortest, if not the shortest, terms in California's Assembly.  In 1853, he was sworn in as a member but his term ended 3 days later when the other candidate's disqualification was overturned.  In 1872, Judge Pitzer was in Pioche where he became involved in the following contretemps:

Judge Pitzer and Colonel Johnson had a quarrel and indulged in animated target practice with six-shooters at Pioche last Friday.  Six shots were exchanged.  Outsiders wounded as usual; principals unscathed as customary . . . .

Reese River Reveille, reprinted in Leo Schafer, Law & Disorder in Pioche (2009).  One of the wounded did eventually die, but reportedly no charges were brought. 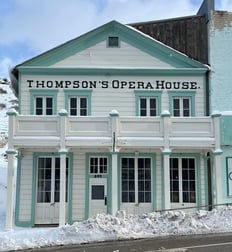 No File Number, No Filing
Appearances Matter According To ISS' Proxy Voting Guidelines