Earlier this week, the Securities and Exchange Commission adopted a new rule that will require a company to describe any practices or policies it has adopted regarding the ability of its employees (including officers) or directors to purchase financial instruments, or otherwise engage in transactions, that hedge or offset, or are designed to hedge or offset, any decrease in the market value of equity securities granted as compensation, or held directly or indirectly by the employee or director.  This new rule is intended to implement Section 955 of the Dodd-Frank Wall Street Reform and Consumer Protection Act.

As proposed, the rule would have required a company to disclose whether it "permits" such arrangements.  This seemed to me to be backwards because hedging is generally permitted unless the company has adopted some policy or procedure prohibiting it.  Thus, the question isn't whether a company permits hedging but whether it prohibits hedging.  I submitted a comment to this effect and the SEC has agreed (see text accompanying note 52 in the adopting release).

Below is my mark-up showing the changes between the proposed and final version of the new rule. 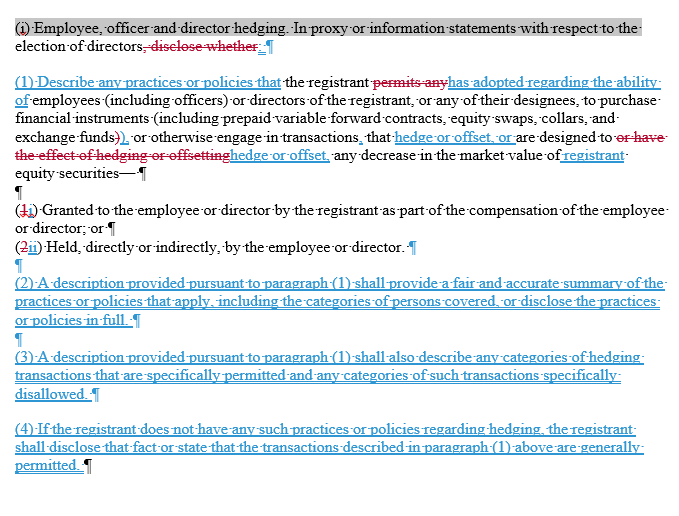