As generally understood, the parol evidence rule prohibits the introduction of extrinsic evidence to alter, vary or add to the terms of an integrated agreement.  “Parol” is derived from the French word, “parole” meaning speech.  The parol evidence rule came into being as society became increasingly literate.  It was then that the written word began to join witnesses as a mode of proof.  Eventually, the writing evolved from proof to the operative act itself.   When people could generally read and write, society began to expect to hold parties to the written version of a transaction because the parties could control the content of the document.  See John Wigmore, A Brief History of the Parol Evidence Rule, 4 Columbia L. Rev. 338 (May, 1904).

The California legislature has thrice codified the parol evidence rule in Section 1625 of the Civil Code, Section 1856 of the Code of Civil Procedure, and Section 2202 of the Commercial Code.  Parties often include a prohibition on parol evidence in the "boilerplate" section of their agreements.  Such a provision would preclude the admission of extrinsic evidence to contradict the agreement or offer an inconsistent meaning.  Would it als prohibit the use of extrinsic evidence to explain the meaning of the contract's language?  That was one of the questions addressed by the Court of Appeal in Hot Rods, LLC v. Northrop Grumman Systems Corp., 2015 Cal. App. LEXIS 1094 (2015).  The Court, in an opinion by Justice Eileen C. Moore, rejected the plaintiff's argument that such extrinsic evidence was admissible:

But by attempting to introduce any extrinsic evidence here, Hot Rods [the plaintiff] is trying to do an end run around the integration clause itself.  The sentence “no extrinsic evidence whatsoever may be introduced in any judicial proceedings involving this Agreement” permits no other interpretation.  The expressed intent of the parties was to bypass the general rule that consistent extrinsic evidence is admissible to explain the meaning of a contractual provision.  Contracts must mean what they say, or the entire exercise of negotiating and executing them defeats the purpose of contract law—predictability and stability.

The court also rejected the plaintiff's argument that the enforcing the contractual ban on extrinsic evidence would contradict public policy, finding that enforcement of a private contract in this case had no implications for public policy.

Yesterday, I wrote about the Hanukkah and the Bible.  One of the other sources for the Hanukkah story is the Jewish Historian Titus Flavius Josephus.  In Antiquities of the Jews, he refers to the "festival of the lights".  Perhaps that is why Hanukkah is often incorrectly translated to mean the festival of the lights.  It actually is derived from the Hebrew word meaning to dedicate (i.e., the Temple). Nonetheless, the holiday is celebrated by lighting a candelabra with nine lamps.  This candelabra is not the same as the candelbra used in the Temple, which had only seven lamps.  The Temple menorah is famously depicted in the Arch of Titus which commemorates the sack of the Temple in 70 C.E. by the Romans: 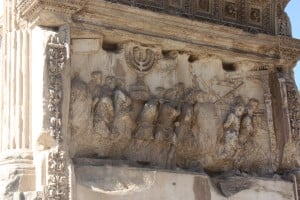 In modern times, the word hanukkiyah was coined to refer to the menorah with nine lamps that is lit during the Hanukkah holiday.