Homographs are words that share the same spelling but have different meanings.  One such word that is very familiar to lawyers is the word "case".  Lawyer's try cases, shelve books in cases, and write in upper case and lower case letters.  How can one word share the same spelling and pronunciation and yet have such different meanings?  As one might expect, the answer can be found by delving into the parentage of "case" and "case".

When referring to a compartment such as a bookcase or briefcase, the word has a different lineage.  In that case, the Latin parent is the word capio, which means to seize or capture.  It is from this word, that we get the notion of upper and lower case letters.  Manual typesetting involves the arranging of sorts (letters or numerals) into words.  Typesetters stored these sorts in separate cases, with the capital letters in the upper case and the lower case letters in the lower case, as illustrated below: 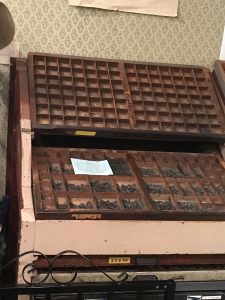 In Act IV, Scene 6 of King Lear, William Shakespeare makes punning use of both meanings of "case" when he has King Lear say to the blinded Earl of Gloucester: "No eyes in your head, nor no money in your purse? Your eyes are in a heavy case, your purse in a light." Thus, "case" could mean that the Earl's eyes are in a bad situation or in bad sockets.

Applying The Statute Of Frauds To "Et Al."
Can The Legislature Hire Its Own Lawyer?