The Cost Of Justice In Nevada

In February, I penned this post about some of Nevada's historic rural courthouses.  Recently, I visited Goldfield, Nevada.  Although Goldfield is the county seat of Esmeralda County, it has no gas station and no supermarket.  Esmeralda County has a land area of over 3,500 square miles and a population of less than 900 souls.  The county school district consists of three elementary schools and no high school.  The Goldfield airport is a 3,100 foot gravel strip.

As the town's name implies, Goldfield owes its existence to gold, which was discovered in 1900-1901 by Nevada's most successful prospector, Tom Fisherman.  His success was in finding gold, not profiting by his discoveries.

Goldfield wrested county seat status from Hawthorne in 1907 and commissioned the courthouse pictured below.  It was completed at cost of nearly $80,000 in 1908 and still provides office space for county officials.  A jail is tacked on to the back of the building. 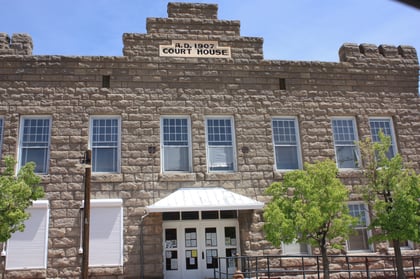 On Monday, I noted a report of a sharp increase in personal trading violations at the California Public Employees Retirement System (CalPERS).  Yesterday, The Sacramento Bee reported that CalPERS is "reviewing" the upswing in violations.  The article does not mention whether the Securities and Exchange Commission or the U.S. Attorney's office has any taken any interest in the situation.