The Investment Company Act - What Does Tonopah Have To Do With It?

Readers of this space may have noted my fondness for rural Nevada and the town of Tonopah in particular.   Tonopah owes its existence to the vast silver and gold deposits that lay beneath it.  In 1900, rancher James Logan Butler discovered a ledge of silver while tracking down an errant mule.  Soon Tonopah was a boomtown.  Wyatt Earp  moved there in 1902 and served as Deputy U.S. Marshall and saloon owner.

The mining fortunes of  Tonopah feature in Investment Company Act jurisprudence.   The Tonopah Mining Company of Nevada had been incorporated in 1901, shortly after Jim Butler's discovery.  Although Tonopah's mines were exceedingly rich, they were not inexhaustible.  By 1947, they had largely played out.  That same year, the Tonopah Mining Company applied under Section 3(b)(2) for an order declaring that it was not an investment company.

The Securities and Exchange Commission denied the application, finding:

"At organization the applicant was undoubtedly primarily engaged in the mining business.  It has since changed its character and it has become in large part a company engaged in the business of holding and trading in securities. In recent years its holdings of investment securities have been such as to bring it within the definition of an investment company contained in Section 3 (a) (3) of the Act.  While it has specialized in the securities of mining enterprises, it has not done so with a view to exercising control or engaging in the business of mining; on the contrary it has assumed the position of an investor.  Approximately 94% of its total assets (exclusive of cash and U.S. Government bonds) are represented by investment securities and all of its net income is derived from interest, dividends or trading profits in such securities.

While it may be true that the management hopes some day to acquire controlling interests and exercise control in existing or new mining enterprises in which it is interested, we cannot find that applicant is at present primarily engaged in the business of metal mining.  Accordingly the application must be denied."

In the matter of The Tonopah Mining Company of Nevada, 1947 SEC LEXIS 321. 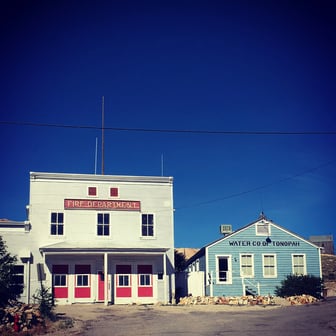 They Went Where?
Copenhagen Counsel Causes Choice Of Delaware Law

The Investment Company Act - "We Didn't Start The Fire . . ."
SPACS And Tonopah