According to the California Secretary of State's Women on Board report, 22 publicly held corporations moved their principal executive offices out of California.  These data were based on a comparison of annual reports filed in 2019 to the annual reports filed in 2020.  I was curious about where these corporations went.  It turns out that Texas was the big winner, garnering a nearly 32% share of California's "flight of the wild geese": 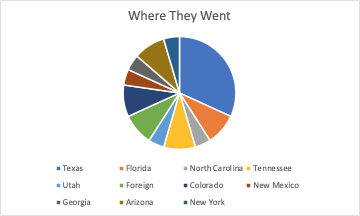 "Was it for this the wild geese spread
The grey wing upon every tide"?

The Secretary of State's report provides no explanation for these relocations, not could it.  Nonetheless, the decline in publicly held corporations locating their principal executive offices in California should be a cause for concern, especially if the flight continues.

Happy St. Patrick's Day!
The Investment Company Act - What Does Tonopah Have To Do With It?

Delaware Finally Catches Up To Nevada (Well, Not Quite)
Why You May Not Want To Be A "Guiding Spirit"
Owners, Directors, Officers And Managing Agents May Face Liability Under This California Statute - Oh My!