"Aaron Burr, sir
Can we agree that duels are dumb and immature?"

I recently had occasion to inspect some of the county records in the "Million Dollar Courthouse" in Pioche, Nevada.  Among these records were the 19th Century oaths of office signed by persons entering into public office in Lincoln County.  These oaths were written out in longhand and duly notarized.   I was intrigued by these oaths because they went well beyond the usual promise to support, protect and defend the constitutions and governments of the nation and state:

I do solemnly swear that I have not fought a duel, nor been a second to either party, nor in any manner aided, or assisted in such duel, nor been Knowingly the bearer of such Challenge or acceptance, since the adoption of the Constitution of the State of Nevada.  and that I will not be so engaged or concerned, directly or indirectly in or about any such duel during my continuance in office . . . .

This particular oath was not peculiar to Lincoln County.  The swearing off of duels was actually specified in Nevada's original constitution of 1864, Art. XV, Sec. 2, which applied to all members of the legislature and "all officers, executive, judicial and ministerial".  In 1914, the constitution was amended to eliminate the references to duels.  The 1849 constitution of neighboring California included a provision (Art. XI, Sec. 2) barring duelists from holding any "office of profit" under the constitution. 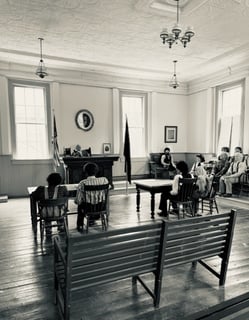 The courtroom in the "Million Dollar Courthouse"